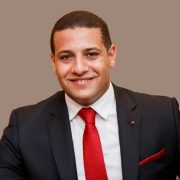 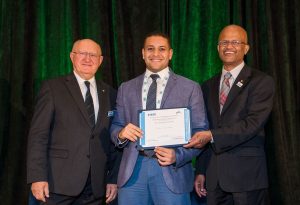 Hassan Eldeeb has been interested in green energy since his undergraduate days. His undergraduate and master’s degrees are in the field of electric power and machine engineering, and his master’s thesis was about the integration and operation of large-scale photovoltaic panels into the medium voltage electricity grid. He has always believed that research should have an impact on industry.

“Engineering is about finding and enhancing the solutions of existing industrial challenges, rather than finding a solution of an imaginary problem that might happen decades from now,” Hassan says.

Hassan is now a third-year doctoral student in Electrical and Computer Engineering at FIU, and his research into the systems that power electric vehicles recently earned him two awards from the Institute of Electrical and Electronics Engineers (IEEE). He won the Best Paper Presentation award at the 2019 IEEE Applied Power Electronics Conference and Exposition (APEC) in March 2019. The APEC conference is the major annual conference sponsored by the IEEE Power Electronics Society and focuses on developments in power electronics for practical utilization in industry. Hassan also won the Best Student Poster Award at the 53rd IEEE Industry Applications Society (IAS) annual meeting in September 2018. The IAS conference, the largest annual conference organized by IAS, focuses on developments and contributions in electrical engineering that directly impact industry.

Hassan was born in Cairo, Egypt, and received his bachelor’s and master’s degrees from Ain Shams University in Cairo. Before coming to FIU in Fall 2016, Hassan was searching for research groups and labs that have a strong publication history and academic reputation in electric energy systems, motor drives, and power electronics, in particular. At FIU, he found Dr. Osama Mohammad’s energy systems research lab, a place that Hassan describes as a dreamland for him.

“My research focuses on enhancing the reliability of electric vehicles through the early detection of faults that might happen in the motor drive system of the vehicle,” Hassan says. “That is done using physics-based and mathematical models and digital signal processing to create the digital twin (clone) of the drive system that can alert the vehicle’s driver of the fault’s existence at its embryonic stages so he/she can schedule maintenance quickly.”

Hassan hopes that his research will help prevent catastrophic outcomes resulting from undetected electrical faults within hybrid and electrical vehicles. “With the ongoing revolution in the transportation industry, and the commercial availability of hybrid and electric vehicles (cars and buses), and the ongoing monumental efforts in the aviation industry to move toward hybrid or completely electric aircraft, the reliability of such systems was (and is still) a big issue that requires serious investigations. Unlike mechanical failures, the electrical faults propagate very quickly, and if the faults were not predicted or detected at their initial stages, they will lead to catastrophic consequences.”

Hassan’s dream job is to work in the research and development lab of an industrial organization such as the R&D departments of Siemens or Tesla. Hassan would also like to return to academia to teach new generations about the industrial importance of what they learn in the classroom.

Hassan gives credit to his family for his success. “I would love to express my ample gratitude to my parents, my sister, and wife, Mrs. Nourhan Abdelfatah, who is a PhD student at the Civil and Environmental Engineering department of FIU,” he says. “I would never be able to achieve any good without their support.”