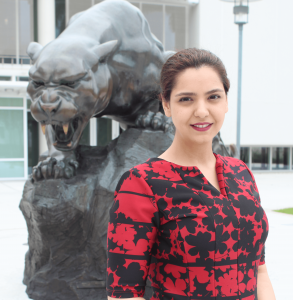 Familiar with the pain of being denied equal opportunities, Mitra Naseh has spent most of her life advocating for vulnerable populations and pushing for equality. At age 13, she started volunteering in non-governmental organizations as an after-school tutor for street children in Tehran.

“My passion and commitment to work with vulnerable populations have guided my career and academic journey,” Mitra says. Her first professional position was as a humanitarian service provider in 2009 with the International Planned Parenthood Federation office in Tehran, where she was a manager for a reproductive health project for Afghan refugees. She later joined the office of the United Nations High Commissioner for Refugees in Tehran and worked as a caseworker interviewing refugees for resettlement and emergency cash assistance. She also worked for the UN Office on Drugs and Crime as part of the evaluation team monitoring the comprehensive drug treatment and HIV control services provided through drop-in centers for refugees.

Mitra earned bachelor’s degrees in Economics and Computer Software Engineering from Tehran University and Azad University in 2007 and a master’s degree in Economic Development and Urban Planning from Alzahra University in 2011. When she realized that she needed to learn more to be able to do more, Mitra decided to search for doctoral programs in social welfare with opportunities for research on immigrants and refugees. She was familiar with FIU’s Dr. Miriam Potocky because of her book on social work with refugees, which Mitra had cited multiple times in her master’s thesis. Mitra entered the Social Welfare program at FIU in 2015, and Dr. Potocky ultimately became her advisor.

“It was a turning point in my life,” Mitra says of starting her doctoral program. “I became a full-time student and researcher after being mainly a service provider for most of my life.”

“My research and publications focus on some of the most understudied topics in health disparities, including cultural adaptations in trauma interventions, refugees’ capabilities in fulfilling their potentials, and shortcomings of commonly used approaches in measuring deprivations,” Mitra says.

Mitra has received external funding as the principle investigator for three of her research projects, including funding from the Coral Gables Museum to guest curate the “Sheltering Survivors” exhibition, a project for which she received the 2018 FIU Provost Award for the Best Creative Project. She’s also interested in interdisciplinary research. Through a recent collaboration on a research proposal with two doctoral students at the University of Texas at Austin, she received the Solution Focused Brief Therapy Association 2019 Research Award.

Her work has also led to the creation of a mobile app. “My previous collaboration with three other doctoral students at FIU resulted in the design of SmartsAid, a mobile application helping refugees connect to information about available humanitarian services in their area,” Mitra says. “I was named among FIU’s 100 Women Innovators by FIU’s Center for Women’s and Gender Studies in 2018 for the idea and design of SmartsAid.”

Beyond her academic work at FIU, Mitra has served on the University Graduate School Advisory Board. She’s also served in the Student Government Association as a Graduate Senator, Chair of the Graduate and Professional Student Committee, and an e-board member. Other positions include serving as graduate representative of the School of Social Work at the Deans Student Advisory Committee and as student representative at the Educational Policy Committee. She co-founded the Initiative on Social Work and Forced Migration at FIU in 2019 and received the Outstanding Student Life Award under the Graduate Leadership Category in 2019 for helping enhance the overall graduate student experience at FIU.

After finishing her doctoral degree in Summer 2020, Mitra will join the faculty at Portland State University in Portland, Oregon, in Fall 2020 as an Assistant Professor in the School of Social Work. “I am looking forward to utilizing my research and teaching experience to prepare future leaders of social change,” she says.