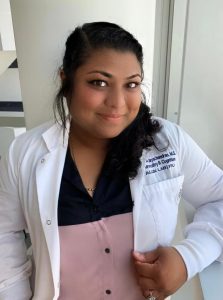 Maanasa Jayachandran has been interested in neuroscience since taking an AP psychology course in the 10th grade. Her casual interest eventually evolved into a fascination with learning and memory.

“As I took more focused courses and gained research experience, I realized that memory is one of the most fundamental mental processes,” she says. “Basically, without memory, we are capable of nothing but simple reflexes and stereotyped behaviors.”

Maanasa was born in Manhattan, Kansas, and grew up in Miami. She attended the University of Miami, where she earned undergraduate degrees in Neurobiology and Molecular Biochemistry. She earned a master’s degree in Mind and Brain Sciences from the University of Sydney in Australia. Currently, she’s a 5th-year doctoral student at FIU in the Cognitive Neuroscience program in the Department of Psychology.

Maanasa recently won the NIH Blueprint Diversity Specialized Predoctoral to Postdoctoral Advancement in Neuroscience (D-SPAN) Award (F99/K00), a training award that funds the last one to two years of Maanasa’s graduate work at FIU. Once she joins a postdoctoral fellowship lab, the grant funds will transfer to her new institution for three to four years of postdoctoral training.

Maanasa’s work focuses on a specific neural circuit of the medial prefrontal cortex (mPFC) that is known for decision-making. As part of her research, she trains rats to remember sequences of odors by responding to “in-sequence” and “out-of-sequence” odors differently. She uses DREADDs (Designer Receptors Exclusively Activated by Designer Drugs), electrophysiology, and optogenetics to test the hypothesis that different mPFC projections contribute in different ways to short- and long-term aspects of memory retrieval for sequences of events.

“These experiments will establish foundational knowledge about specific mPFC pathways critical to memory and behavior, which will aid in the development of future therapeutic strategies,” Maanasa says. “Moreover, this will help us better understand what might be happening in the brains of people who are affected by memory disorders such as Alzheimer’s disease.”

Maanasa credits Dr. Timothy A. Allen, the principle investigator of the Allen Neurocircuitry and Cognition Lab, for bringing her to FIU. He interviewed her before he opened the lab and ended up offering her a spot.

“In short, he believed in me (which is priceless when it comes to a mentor) and cemented my decision to come here,” Maanasa says. “Moreover, I chose to come here because, although the Cognitive Neuroscience program was brand new at the time, the faculty seemed to be invested in, not only the success of the program, but also the progress and well-being of each student. The faculty cares about our input to improve the program, which has allowed us to shape the program for what it is today.”

Maanasa wants to continue working in academia and research after completing her degree. “I want to extend my training as a postdoctoral researcher by investigating the vulnerability of mPFC pathways in validated genetic rodent models related to mental health disorders such as schizophrenia and Alzheimer’s disease,” she says.

She eventually wants to become an independent investigator and open her own lab where she can continue to explore neural circuitry, memory, and related mental health disorders. Beyond that, she hopes to promote diversity and inclusion within the scientific community.

“Female scientists continue to be underrepresented in the field of neuroscience, and I hope to encourage students from diverse cultural backgrounds to join and excel in this field,” she says.

It’s a goal that winning the NIH award is helping to support and is one of the reasons why winning the award has meant so much to Maanasa. “It not only validates the field I chose to pursue and a sense of belonging in the scientific community, but also, it’s an opportunity to train, educate, and mentor students who are underrepresented and encourage them to pursue their dreams.”

The award has presented Maanasa with the opportunity to learn from respected scientists without the limitations of funding, which is rare. “Through the supportive interactions with my mentor (Dr. Allen) and co-sponsors (Dr. Robert Vertes from Florida Atlantic University and Dr. Farah Lubin from the University of Alabama at Birmingham), my insecurities about becoming a capable neuroscientist are quieted and replaced by confidence,” she says. “I am sincerely honored to be a recipient of this award, and my success speaks not just to my personal achievements but to the mentorship of my current and former PIs.”