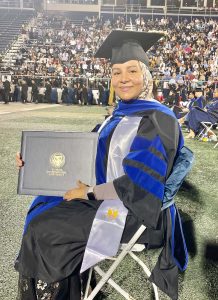 Heba Ali accomplished a lot during her time at FIU. She experienced the joy of living and working in FIU’s culturally diverse community. She discovered a love of Café Bustelo Cuban coffee. And most importantly, she pursued a passion for physiology.

Heba, a Fall 2021 doctoral graduate from the Department of Biological Sciences, developed an interest in physiology while studying immunology at Assiut University in Egypt. She earned bachelor’s and master’s degrees from Assiut before travelling to the United States and completing an additional master’s degree in biology at Virginia Commonwealth University in Richmond.

When Heba decided to continue her graduate studies in the U.S., she ultimately determined that FIU was the right place for her. The campus was diverse, the weather was nice, and her research interests aligned with those of Dr. Philip Stoddard, a professor in Biological Sciences.

“One of the successful steps in graduate school is to find the best mentor,” Heba says. “I was under the supervision and guidance of one of the most impressive professors during my PhD studies.”

Heba’s doctoral project was an interdisciplinary endeavor investigating the interplay among metabolism, endocrinology, electrophysiology, and genetics.

“Understanding how organisms allocate finite resources across physiological functions is a major challenge in biology,” Heba says. “I was interested in understanding the energetic cost of the physiological functions and how animals prioritize their energy usage. Using the electric fish as a model organism, my PhD research explored how vertebrates control trade-offs in competing for metabolic demands.”

In addition to working on her research and presenting at several conferences, Heba found the time and energy to become involved in several activities on campus, including Three Minute Thesis (3MT®) and the Graduate Advisory Board. She has been repeatedly recognized for her work. In 2021, she was chosen as a Real Triumphs Graduate, and she won the Diversity Award for the International Society for Neuropathology (ISN). ISN’s Diversity Award is an annual initiative to support neuropathological scientists who have been disadvantaged due to gender, ethnicity, disability, class or other characteristics. Heba also secured a Grant in Aid of Research from Sigma Xi, the scientific research honor society and received the University Graduate School’s Dissertation Year Fellowship for two semesters.

On top of all of that, Heba is also a mother. She attributes her success to her ambition, her hardworking nature, and her punctuality. She also cites passion as a driving force.

“I am always passionate about empowering women to pursue careers in science and technology,” she says.

Now that Heba has completed her doctoral degree, she plans to continue her research and become a professor. She recently accepted a neurological sciences post-doctoral position at the University of Chicago.

“My PhD journey was overwhelming at times due to being a grad student and mother at the same time,” she says. “However, I do not ever give up on my dreams.”