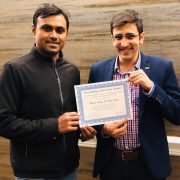 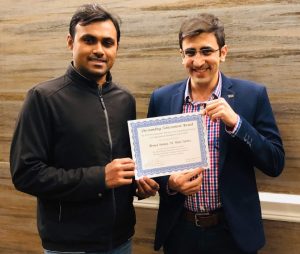 Ahmed Imteaj’s interest in computing and programming began with a Google search. During his high school years in Bangladesh, he became enamored with how the Google search engine functions, and it influenced him to build a career in computer science.

“The impact of this research goes beyond computer science and can be applied to various real-world applications, from healthcare to energy and transportation infrastructures,” Ahmed says.

Ahmed was introduced to the research aspect of IoT (Internet of Things) during a conference that he attended as an undergraduate student in Computer Science and Engineering at Chittagong University of Engineering and Technology (CUET) in Bangladesh. He then began to get more involved in IoT and began publishing papers about IoT and smart systems.

“In those papers, I tried to reveal findings of the conventional system and proposed some real-life problem’s solution,” Ahmed says. Examples of these types of solutions include autonomous fire alarm systems, robots for search and rescue missions, and interactive speech-recognizable robots.

After Ahmed completed his undergraduate degree at CUET, he chose to pursue his Ph.D at FIU. A number of factors drew him to the University, including the faculty, FIU’s research background and facilities, and the attractive campus and good weather. Ahmed soon joined Dr. Amini’s Sustainability, Optimization, and Learning for InterDependent networks (solid) laboratory. Solid lab is an interdisciplinary research group dedicated to bridging the gap between theory and real-world application. Ahmed considers joining the lab as the turning point of his doctoral career.

“At solid lab, we aim at solidifying critical infrastructures leveraging computing and information sciences, i.e., we are connecting Computer Science and Engineering worlds!” Ahmed says. “I try to answer how we can handle the problem of the continuous stream of real-data which is mounting over time and, thus, ensure more reliability, scalability, efficiency, and security than conventional cloud-based systems.”

After finishing his doctoral degree, Ahmed wants to pursue a research career as a research scientist or computer science faculty member. He says, “I would like to educate the next generation of computer science students and serve underprivileged people by contributing to the cause of working for humanity in the broader sense with whatever capabilities and scope I have.”