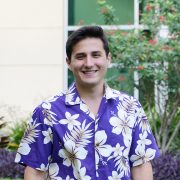 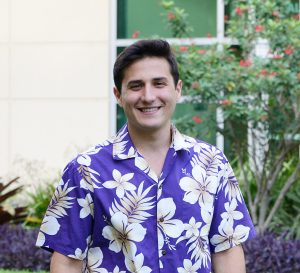 Juan Canoura has always been interested in science, but it was his high school chemistry teacher who helped him understand how deeply rooted chemistry is in our lives.

“I had a very enthusiastic chemistry teacher who would show us how computer technology was linked to the chemistry of silicon, or how biological processes necessary for life are a consequence of the varying structures and connectivity of oxygen, nitrogen, and carbon,” Juan says.

Juan’s resolute belief in the power of chemistry remains. “Even now when faced with a challenge in my research endeavors, I know if I can tackle it from a chemical standpoint, everything at the macroscopic level will fall into place,” he says.

Those research endeavors were recently featured in the Journal of the American Chemical Society. His work focuses on improving the detection of small molecules by using an exonuclease mixture and specific DNA sequences to make the molecules more readily detected.

“We have taken this complex mixture of compounds with varying structure and properties and simplified them into target-specific DNA molecules which can be more readily detected using traditional DNA detection assays,” says Juan, a McNair Fellow. Practical application of this process could be used to improve screening in situations where samples may be limited, such as medical diagnostics, drug screening, and environmental safety.

Juan’s decision to join the chemistry doctoral program at FIU grew from his desire to continue working with his mentor, Dr. Yi Xiao, who provided him with a wealth of opportunities as an undergraduate student. His interests closely aligned with her research direction, so he was able to further his career development by becoming involved in various projects, proposals, and papers. Her guidance during his undergraduate research helped him improve his persistence and critical thinking skills. He also honed his experimental skills in her lab, and in instances when the technology he needed wasn’t available onsite, he was able to receive training from collaborators.

“Dr. Xiao always provided me with support to attend scientific conferences as an undergraduate so that I may learn about the cutting-edge research within my field and disseminate my research findings,” Juan says. “By the time I had graduated with my undergraduate degree, I was impressed by the sheer amount of growth I had experienced in Dr. Xiao’s lab. Dr. Xiao has also had my best interest at heart, and I knew that by joining her lab, I would continue to grow and better myself as a person and researcher.”

After completing his doctoral degree, Juan plans to become a professor. He wants to continue his research as an independent investigator and tackle critical issues in medical diagnostics, environmental safety, and law enforcement. He also hopes to become a mentor to future scientists and have the same impact on their lives that Dr. Xiao has had on his.

In addition to his professional goals, Juan is an avid cycler and would like to participate in the Tour de France one day as a nonprofessional.